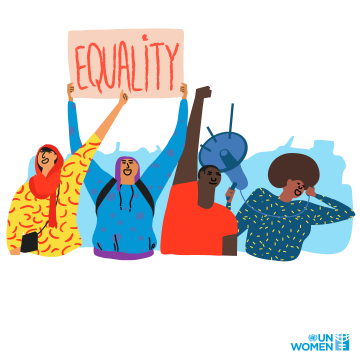 Implemented in partnership with the Embassy of Sweden, the Friedrich-Ebert-Stiftung and the Centre for Sustainable Peace and Democratic Development (SeeD), the campaign aims to contribute to progress in gender equality by raising awareness on its importance and motivating people to take action for gender equality in Cyprus.

The campaign will run until 29th April, inviting people from all communities of Cyprus, to share ideas on simple, yet impactful ways to improve gender equality in personal, professional and political life. Some of the ideas shared so far include including gender equality in school curriculum, increasing the duration of paternity leave and provision of free or cheaper childcare.

How can you participate in the campaign?

Once the campaign is completed, the ideas submitted on the platform will be disseminated through social networks and traditional media. In addition, a public event will be organised on 10th May, where the ideas will be presented and discussed by stakeholders and gender experts.

What is Pusula / Ππούσουλας Platform?

Pusula / Ππούσουλας builds on an open-source software used by 130 institutions and 90 million people globally and aims to empower people to interact, share ideas and decide jointly on how to solve societal problems at the neighbourhood, village, city or island-wide level.