The Friedrich-Ebert-Stiftung, Symbiosis, and PRIO Cyprus Centre invite you to the conference “Settlement, Demography, and Politics in north Cyprus”; this conference aims to explore and demystify the phenomenon of Turkish Settlers in Cyprus’ north. 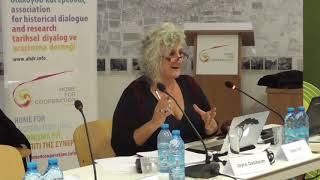 Immediately after the de facto division of Cyprus in 1974, the Turkish Cypriot leadership and the Turkish government facilitated the migration to the island of around 25,000 Turkish nationals with the aim of securing territory in the island’s north. For the most part, these were persons with no political agenda in Cyprus who were already going to be resettled by the Turkish state because of dam-building and other projects. Nevertheless, this is a community that is usually seen, both in Cyprus and internationally, as under the thumb of Ankara and potential spoilers of a settlement to reunify the island.

The one-day conference brings together experienced and early career scholars who work on a politically and socially contested issue: Turkish settlers in Cyprus. The aim is to demystify this group by shedding light on the social, political and economic characteristics that distinguish them from “original” Turkish Cypriots. One of the aims is to examine the ethnic, religious, and political diversity within this group, which is usually seen, both in Cyprus and internationally, as a monolithic community under strong Turkish influence. Papers to be presented include studies on political culture and political participation of Turkish settlers, as well as case studies on Alevis, Kurds, and Bulgarian Turks who settled in Cyprus after 1974.